We are a group of independent schools belonging to the Trinity Group.  We decided to set up our own book award for the group, and we had our inaugural Award Ceremony in 2015.  This was a great success, and we have decided that the Award was worth carrying on with. After this successful first year, we decided to widen the Award to allow schools not in the Trinity Group to join us.  If your school would like to take part, you would be welcome to, just use the Contact Us button on this website for more details.

Early on, we decided to go for a themed approach to our Award, rather than the latest published books.  We felt that this allowed us to include classic books alongside the newly published authors. Our first theme was War and Peace, as it was the centenary of World War One, the 2016 Award is on Voyages and Journeys and the theme for 2017 is Sense-ational Reads. The books are chosen by the schools who participate in the Award in the previous year, and a shortlist is decided by the working party.

The working party decided on the timings of the Award in order to segue seamlessly into the Carnegie Medal Shadowing for your reading groups.  This Award starts in September (with the booklists being released to Librarians at the end of June), and the Ceremony is in March, just before the Carnegie Shortlist is announced. 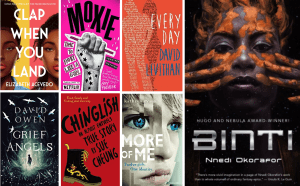