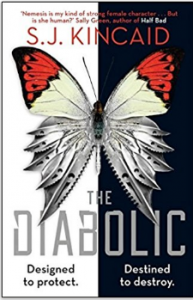 Nemisis is a Diabolic. Created to protect a galactic Senator’s daughter, Sidonia. The girl who is as much as sister as a master. There’s nothing Nemesis wouldn’t do to keep her safe.
But when the power-mad Emperor summons Sidonia to the galactic court as a hostage, there is only one way for Nemesis to protect her… she must become her; hiding her true abilities and pretending to be human.
As the Empire begins to fracture and rebellion looms closer, Nemesis learns there is something stronger than her deadly force: the one thing she has been told she doesn’t have ­– humanity. A
And, amdst all the danger, action and intrigue, that might be the only thing that can save her, Sidonia and the entire Empire…