The theme for the 2023 TSBA (Trinity Schools Book Award) is … Facing the Future!

This year we have two Award shortlists: the TSBA (Year 7+) and Trinity Plus (Year 9+).

Check out the Creative Responses (Google Slides) from students – both the prize-winners and many other inspiring examples!

To take part in the 2023 Awards, contact Tamsin Farthing and ask for details.

On behalf of the TSBA Committee of librarians, we are so sad to learn of the death of Judith Kerr; an author we somehow thought would outlast us all. We were fortunate enough to meet Judith at the inaugural TSBA award ceremony in March 2015; her novel When Hitler Stole Pink Rabbit (based on her own childhood experiences of the family fleeing Nazi Germany) was shortlisted for our first ever award. Judith was one of six shortlisted children’s authors represented on the night at Latymer Upper School, and her presence was definitely a draw for the others: novelist Elizabeth Wein came all the way from Scotland, tweeting: 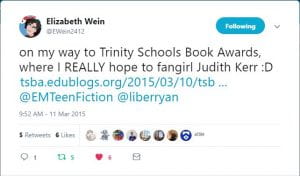 Michael Morpurgo also turned up as a last-minute surprise to accept the Award for his novel Private Peaceful. The pair had long shared a publicist and publisher; they were thrilled to see each other and catch up in our makeshift “green room” before the ceremony.

Judith was keen to revisit Latymer; her son Matthew (novelist Matthew Kneale) is an alumnus and had “such fond memories”, she told me, citing some of his favourite teachers, including Mr Orme, who had only recently retired. When she arrived, she was delighted to be reacquainted with Mr Orme. She was a petite woman with a warm, ready smile that lit up the room. 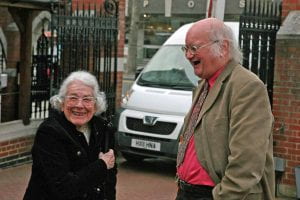 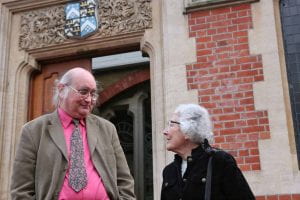 Knowing that we had a star in our midst, we’d asked Judith to present our student competition winners with their prizes. On the day I started to panic about the arrangements: the portable steps leading to our stage were somewhat dilapidated and had no handrail. I took great care on them in my unfamiliar heels; Judith was 91 and we would be asking her to mount these wobbly steps a few times… Philippa Perry, Judith’s publicist, was not worried. “She’ll be fine,” she said, waving dismissively. And she was – practically skipping onto the stage without hesitation.

One of the winning creative responses was a musical composition for piano and violin, written by Nikolas (then in Year 7) at Latymer Upper in response to When Hitler Stole Pink Rabbit. Nik performed the piece at the Ceremony, accompanied by his friend Tianrun on violin – with his muse sitting in the front row. So the prize-giving became another lovely moment, when Judith congratulated the boys, saying how special it had been for her to hear them play. 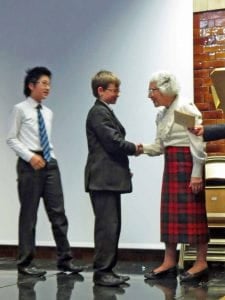 Judith congratulating Nikolas and Tianrun after their performance 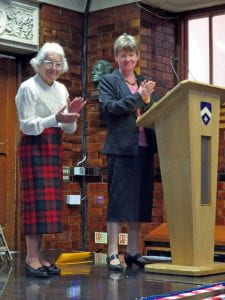 After the ceremony, the authors stayed on to sign books and chat with students for another half an hour. My colleague, Mrs Griffiths, eager to do some fan-girling herself, volunteered to stay with Judith; all were touched by her warmth – she listened intently to everyone and made you feel special. Judith Kerr brought so much stardust to our fledgling award that evening. 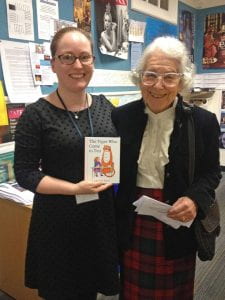 A few months later I was invited to a glamorous birthday party thrown for her at HarperCollins’ swanky London offices near the Shard. The publisher contacted me for help: could I supply some children for a photo op with Judith and the Tiger (from The Tiger Who Came to Tea) at Imperial Wharf before Judith was whisked off to her party by riverboat? Colleagues and friends with young children were only too happy to oblige. 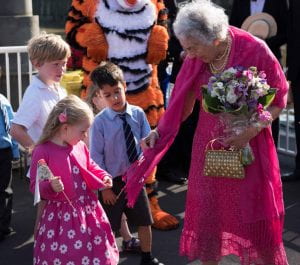 That evening, at the party, I was star-struck by the celebrated authors and illustrators in the room. In the centre of it all was Judith in a bright pink dress, sipping champagne and surrounded by well-wishers. I wasn’t sure she would remember me out of context but when she saw me pass, she pulled me into the conversation, introducing me and telling her guests of the marvellous time she’d had at the TSBA Ceremony at her son’s old school. She later spoke of her long and happy history with HarperCollins, and how she loved her work. She told some funny stories of bad advice she’d received and ignored in her early career – she was an excellent raconteur, her words witty and sharp, her face gentle and sweet.

We are so grateful for her support and for the wonderful legacy she leaves in her books for children of all ages. Having seen her zest for life at close range, it is no surprise to us that she was still writing and illustrating new books until the end, with her most recent book published just last week. She will be missed. 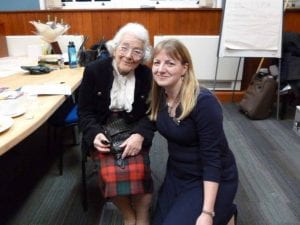 Judith Kerr with me at the inaugural TSBA Ceremony, 2015 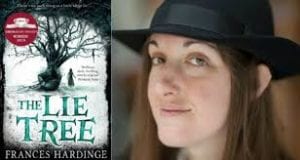 How exciting!  we have just heard that Frances Hardinge is able to attend the Ceremony, so we now have 5 out of 6 of the shortlisted authors, and a record for us!  All the more reason to ensure that you book your school’s places at the ceremony now!